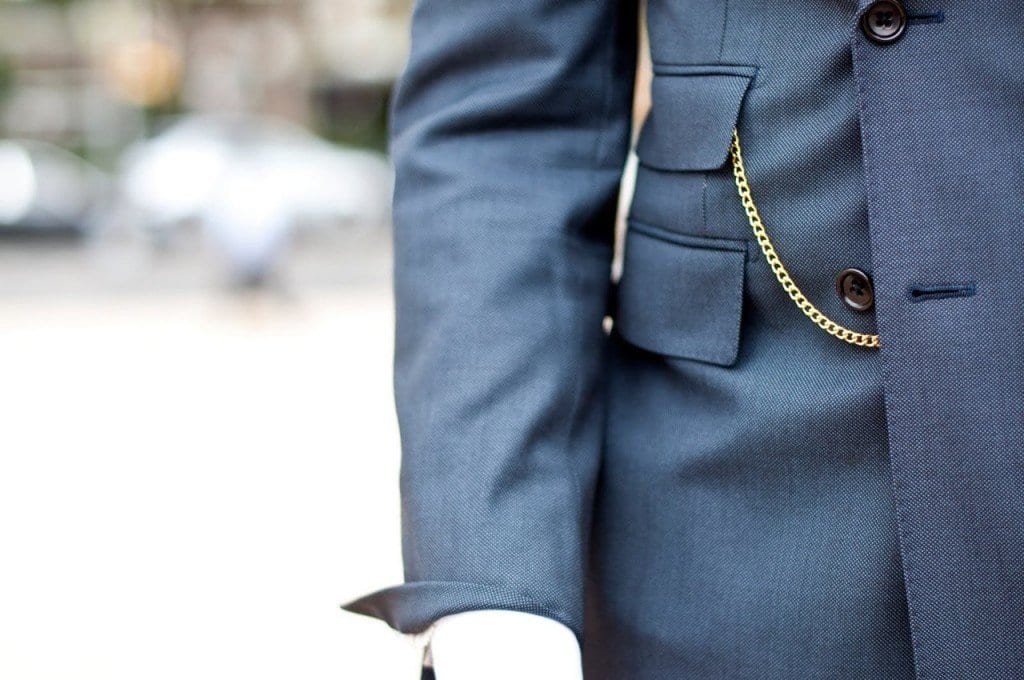 For the uninitiated, the ticket pocket is the small flapped or jetted pocket (it can be straight, or slightly angled), placed just above the right main hip pocket on a men’s jacket. It is normally roughly half as wide as the hip pocket.

The ticket pocket, also known as change pocket, has an old British history. At first it wasn’t even used to store a ticket, as the name indicates today. It became useful before the huge popularity of the railroad, as it was placed on the jackets of equestrians who needed quick access to coins at toll points. Allowing gentlemen to keep their jackets buttoned, this exterior pocket held cash in an extremely convenient way. Ticket pockets were a staple on men’s sturdy country suits before they adapted into the urban suits men wore to commute on a daily basis.

During the Industrial Revolution train travel boomed with men making daily trips to the country or to the city for work. As men found it annoying to go through all their pockets in search of their precious train tickets, the ticket pocket became their natural solution. Tailors started to receive requests for a special pocket made exclusively for this purpose, which eased everyone’s lives (train staff included). A new and practical trend was born.

Today the extra side pocket is not a necessity anymore. Its main function is as a fashion statement that shows high style IQ. It looks sharp and can be a good conversation starter, especially with neophytes who want to know more about it. Even if it’s a British detail, nowadays one can find it on Italian or American suits as well. Men with a penchant for style and sophistication will always like a jacket that offers a little visual variety and sets them apart from the usual two-pocket look. Many modern guys still love that British-dandy vibe they get from an impeccable suit and feel the need to spice up their sartorial excellence with such details.

However, you will find that this pocket which, to be honest, does add an extra kick to any suit or sports jacket, also makes functional sense today. It’s the perfect place to stash a bunch of business cards – extremely efficient in business meetings, on planes (one never knows when opportunity arises, right?) or at VIP clubs. An alternative would be storing aspirins, a tea bag, change, a receipt and even a subway card. Let’s face it, a jacket will always look way better than a “functional” cargo vest.

Since we are evaluating benefits, tall men will find the ticket pocket visually helpful since it fills up some of that negative space in their long torsos. Same goes for the skinny types. Feel free to experiment and show a little personality by playing around with the ticket pocket! Let it spring up nonchalantly on an overcoat or a suit jacket and act surprised by all those turning heads. You may thank British sartorial heritage once again.

The 2022 Oscars ceremony was the most awaited red carpet event of the year, and it was indeed memorable. Looking past the Will & Chris incident, we got to witness celebs in their finest formal attire. Many played it safe, and the others took a risk to stand out – some risks paid off, and

How To Have A Great First Date in SUIT

How To Have A Great First Date in SUIT Every holiday season, people like to couple up so they can create lasting memories. Whether you’re cuddled up in a snowy cabin or sunbathing on a beach, there’s something special about spending a sleepy day with someone you love. If you haven’t dated in a while,